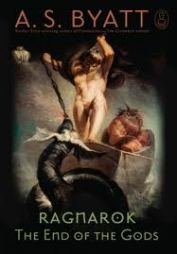 Ragnorok is a decisive event in Norse mythology, signalling the end of the gods, and the end of their world.  In A.S. Byatt’s short, potent novel, a whirlwind tirade of Norse mythology is layered into a child’s wartime fascination with myth, creating a compelling drama that becomes a metaphor for contemporary disaster.  I would call this a description-driven novel, rather than plot or character-driven.  It’s greatest strength is its acrobatic prose and the way esteemed English author A.S. Byatt depicts Norse mythology as a living, breathing recreation of chaos itself.  Chaos refers to a state in which chance is supreme.  Out of chaos comes. . . order. . . and more chaos.  The child in the novel is a cypher for the artistic herself:

“The thin child thought less. . . of where she herself came from, and more about that old question, why is there something rather than nothing?  She devoured stories with rapacious greed, ranks of black marks on white, sorting themselves into mountains and trees, stars, moons and suns, dragons, dwarfs, and forests containing wolves, foxes and the dark.  She told her own tales as she walked through the fields, tales of wild riders and deep meres, of kindly creatures and evil hags.”

In this childlike state we are able to create our own mythologies, our own art.

Here is a beautiful passage about Jormungandr, a monstrous snake, offspring of Loki the shape-shifter, who is thrown into the sea by the other gods:

“With her spine locked, she was a javelin, swift and smooth, her mane of flesh-fronds streaming back from her sharp skull, her fangs glinting.  But she also fell in loops and coils, like a curling whip, like a light ribbon the eddies of the air. . . She was a sensuous beast:  the rush of air pleased her:  she snuffed up the scent of pine forests, heathland, hot desert, the salt of the sea. . . “

Loki, the shape-shifter, disguises himself as a mackerel:  “A mackerel’s skin is a vanishing trick.  Along its sleekness are lines of water ripples, imitating sun and shadow, cloud light and moonlight dropping through the thick water, imitating trailing weed and rushing waves flickering as the mirror-scales twist.”

The writing is visceral, visual, vivid.  This book is literally fantastic, as well as wild, violent, deep and gorgeous, much like life itself.

“. . . in the face of all dangers, in what may seem a godless region, we move forward through the agencies of love and art.” ― Mark Doty

Living on the Edge in Portland, Maine. This is the site they don't want the tourists to see.

Making The Work I Want To Make

Nature's nuances in a nutshell